I'm surprised I have never given a public review of this book!


Talk to Me Like I'm Someone You Love: Relationship Repair in a Flash, by Nancy Dreyfus, Psy.D. 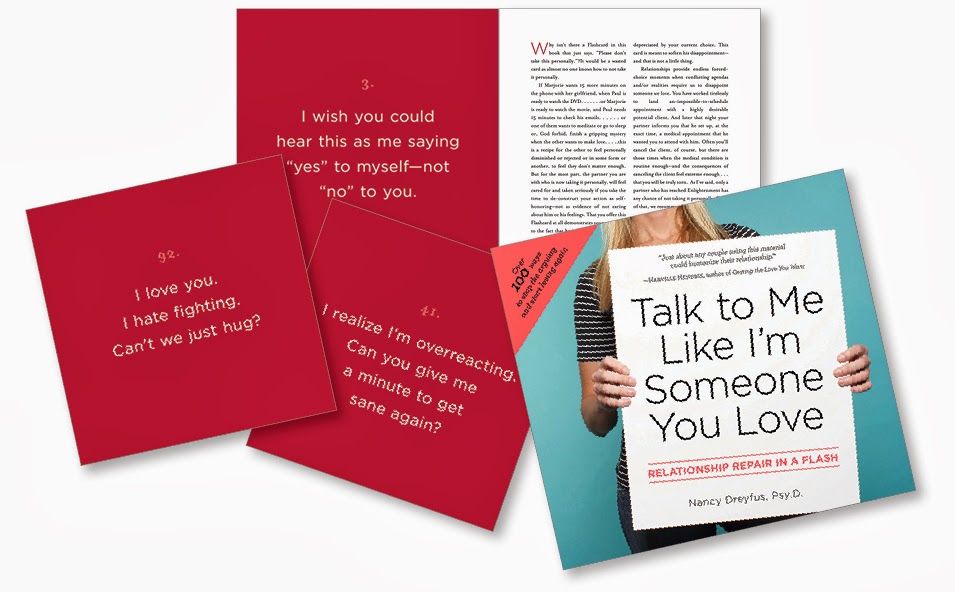 For couples who get "stuck" and need to find a way to reframe & restart conversations in order to harmonize communication and find a way forward, I routinely recommend this book.

It's incredibly simple.  And yet, used appropriately and honestly, the "flashcards" can reset communication patterns toward wholeness.

Check out the reviews on Amazon.com - several highlight the simplicity of the book as its key insight.

I recommend this book several times per year.  I'm shocked I have not reviewed it here before.


Posted by ~ Marty Alan Michelson at 2:01 PM No comments:

A new kind of "speed reading"

It "does" the speed reading for you!

Posted by ~ Marty Alan Michelson at 8:36 AM No comments:

The Ministry of Reconciliation in a Divided World

This great student was a bit timid about her application to a Summer Institute at Duke University & Duke Divinity School.  I walked with her into the process, empowered her to think of herself with new language for her self-descriptions and her application, and she received invitation for her great merit!

I applied, too and we'll do this together!

University Press Release about Piper Ramsey and I.
Posted by ~ Marty Alan Michelson at 12:44 PM No comments:

Old Testament Scholar Peter Enns has just blogged about his reading into recent issues in the Scholarship and Study of King David.  I recommend his blog entry to all.  Among other things, Enns notes:


The positive biblical depiction of David, the authors tell us, is propagandistic, though at the same time leaving one enough clues (inconsistencies) for careful readers to discern that the David behind the text bears only minimal resemblance to the David of the text.


The broader importance of the search for the historical David goes well beyond the question of David himself. It touches upon the very origins of Israel as an independent kingdom, e.g., was there ever a united monarchy, how did kingship develop in ancient Israel, and to what extent are Israel’s own stories about its origins (essentially the stories of Abraham though the Judges) are legitimate (if also hazy) historical sources?


And as both books make clear, this issue is not simply a matter of whether or not one wishes to “trust” the Bible, but how one reads the complex and conflicting information we find there.


I note these issues as my "area of expertise" in Bible includes the stories that include David and it is of significant personal interest to me.

I've recently recorded a series of "lectures"(70+, each 15-30 minutes in length) that focus in on each chapter of 1 & 2 Samuel, up through 1 Kings 2 when David dies.  The work of my "lectures" fits with the work of Scholars, noting that David is a complex character.  Though, my "lectures" suggests possibilities for discerning the complex issues of David & written history, that allow us to discern what I believe are the intentional messages of worship and even, peacemaking since final document that is the Bible functions as a theological document for us and is as much (or more) about God as it is about David.

Seeing this blog entry by Enns is exciting as my files are in progress now..

A few other notes about the "lectures."

(1)  They're not precisely lectures.  Rather, they're something of a genre that I haven't yet figured out and haven't decided how to label.  They are not academic lectures, like what I deliver in the classroom, though they engage the work of scholars and scholarly perspectives.
(2) They are not Bible studies, as I use the work of scholars and a close reading of the Bible text to "challenge" simple ideas about who David (and other characters) acted, based on what the texts of the Bible do say, that we often overlook.  And, it's not precisely an Audiobook, either, as I presented without a transcript and from my informed discernment of 1 and 2 Samuel from years of study, with "just a Bible" as my source.
And, (3) even as the resources have commercial elements to their production, I did not have the luxury of a perfect audio board and pristine editing to finalize the products.  I have very few errors of "um" or "ahhh" or a cough - and yet - the audio productions were not and will not yet be professionally remixed to perfection to edit all of these out, for reasons of time and cash investment.

I look forward to the final stage of production and marketing of the kind of "Scholary Bible Read Along" that I provide.  I have yet to finalize the "genre" or "label" we'll give to the final work.  In the end, I'm excited to know that what we've produced is important in "David Studies" and has a niche' that I think is missing for the everyday reader of the Bible, even while books like the ones Enns has reviewed are great!

I do need a few persons who might be willing to listen to a few "lectures," to offer perspective on a "label" or "genre" you might give to the "lectures."  If you're interested, please email me at martymichelson@gmail.com and I'll share with you four "lectures" on 1 Samuel 16 and 1 Samuel 17 to see what you think I should call these!

Posted by ~ Marty Alan Michelson at 1:20 PM No comments:

Academic Work & the Integration of Faith

The Council for Christian Colleges & Universities (CCCU) introduced a new course for instructors.

“This course gives [schools] the opportunity to engage new and tenure-track faculty in a robust conversation about the dynamics of participating in the intellectual and spiritual engagement of our CCCU students,” said Lorne Oke, executive director of the Center for Learning and Innovation at IWU. (CCCU Website source.)

For colleagues working at CCCU schools, I recommend the coursework.  Even though faith integration is more intentional to my teaching (in Bible, after all!), I learned new data and have a renewed framework for thinking about how I prepare coursework and present course material.

More importantly, I wish I would have "had this material" earlier in my career (for many reasons) - and - I hope colleagues I work with now will engage the material to open up new venues for conversation & collaboration.


Here are the course modules for any wanting to know more.  Contact your University administration to learn more.

Posted by ~ Marty Alan Michelson at 4:59 PM No comments: