Try to help others - intentional mentorship

I work diligently to try to help young people in University classes.

Oftentimes this takes place in an ad-hoc way, where I address specific issues I notice in the class or, on occasion, with an individual.  Every year though, I teach one class that is required for all Sophomore level students planning for ministry.  This class has a number of strategic assignments in the course, each of which builds toward the formation of the students understanding how to "methodically" engage in the steps necessary for Scholarly Research. 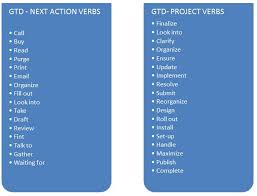 In addition to specifics of course research, I work in the class intentionally to help young people develop some kind of self-autonomy and self-realization for how they plan for their projects.  I work to give students practical tips on how to manage their time, how to work in blocks of time, how to think about large tasks as a series of small tasks that each need to be accomplished and more.

I've blogged about this in the past at this site, including sharing with young people the need to learn how to GTD Get Things Done (If you don't know it, google it.)

Related to fact that persons need Next Action steps to take in order to move beyond an amorphous set of unclear statements in a "To Do List" - I share with learners the need to put specific tasks into a set plan with definable steps and clear next action steps - which requires verbal specificity and deliberate action.

These verbs of action help frame way to move forward:

Getting action steps in order, and then acting upon them, is the key to Getting Things Done!


Posted by ~ Marty Alan Michelson at 4:06 PM No comments:

In the 1960s Aretha Franklin popularized the lyrics: "R.E.S.P.E.C.T. Find out what it means to me! All I'm askin' - Is for a little respect when you get home."

What Aretha called for then "proves" true with studies on human persons decades later.


From the Ten Percent Happier Podcast, I was introduced to Christine Porath.

She has a TED Talk, "Why being respectful to your coworkers is good for business" and there and in her other public presentations she discusses workplace happiness rooted in how we are treated at our places of employment.

In this past week, I was with a friend who, at her place of work, was "treated" to ice-cream treats from her employer.  It lead to a conversation about how often her work places offers "treats" or "incentives" to acknowledge people.  It turns out her place of employment does this nearly weekly - and certainly in every month.  Perhaps it's academics - or churches - or the places where I have been in academics or church settings, though this routine kind of "treat" is not something I have experienced in any routine way.


"What do people want most from their leaders? We took data from over 20,000 employees around the world, and we found the answer was simple: respect. Being treated with respect was more important than recognition and appreciation, useful feedback, even opportunities for learning. Those that felt respected were healthier, more focused, more likely to stay with their organization and far more engaged."


"So where do you start? How can you lift people up and make people feel respected? Well, the nice thing is, it doesn't require a huge shift. Small things can make a big difference. I found that thanking people, sharing credit, listening attentively, humbly asking questions, acknowledging others and smiling has an impact."

Someday I hope to work for a place that offers this, and so much more.

Posted by ~ Marty Alan Michelson at 4:04 PM No comments:

The Happiness Equation: Want Nothing + Do Anything=Have Everything Paperback by Neil Pasricha
I enjoyed this book.  It reminded me at many levels of a class I took as a MOOC a few years ago, which anyone can learn about at this blog:  A Life of Happiness and Fulfillment.
A good book which is not part of the mythical world (my estimation) of “believing oneself” into a new future - “the so-called ‘New Thought’ way” - it is about practices that make a difference in how one views daily life - lived reality.

From Amazon.com:
“As a consulting and clinical psychologist I have the opportunity to plan, organize, and deliver stress management workshops. In fact I delivered one recently and regret that I had not read "The Happiness Equation" prior to that program!  Managing personal (and organizational) stress and distress depends on multiple factors including finding ways to bring greater happiness and contentment into our worlds. Mr. Pasricha's outstanding book presents so many practical and useful ways to build happiness which I believe in turn helps people better manage daily stress.  . . .  There are so many practical ideas, many of which I am applying in my own life, that can be easily applied. In my work I always emphasize that happiness is an "inside job" and too often people make happiness contingent, e.g., "I'll be happy when ... (I have that job, make that money, live there ...)." I love that the book starts by reminding the reader of the fallacy associated that belief and the importance of working on happiness first that in term can lead to life outcomes for which we search.”

Brown Is the New White: How the Demographic Revolution Has Created a New American Majority by Steve Phillips
I did not find this book to be compelling.  As with any book I read, it may have been the time of days/life/week that I was reading - and I may have been distracted or had recently read something in the same vein/topic so that this wasn't compelling.  Dunno.  Senator Corey Booker said about this book: "“Steve Phillips has a deep understanding of how the civil rights movement changed America. His book sparks an important conversation about what increasing racial and cultural diversity will mean for American politics and policy.”"

Dear Ijeawele, or A Feminist Manifesto in Fifteen Suggestions by Chimamanda Ngozi Adichie
Let's face it, while I am a feminist (defined by me as the profound claim that women and men are equal ! ! ! ) - I clearly am too caught up who I am (as male among many other things) to (as above) see and discern all of my own cognitive bias.  As a result, I'm not sure that I "get" this book, though I appreciate it and the function it serves.  The book's primary audience is women, another woman specifically, being given advice on how to raise women/daughters.  I raised two daughters and did my best to help them discern their way forward in the world.  I'm not sure if this book would have helped me, as I "did" or "tried to do" "most" of what it contains.  Alas.  I am always thankful to read books on feminism and feminist perspective, I simply wish that women didn't have to fight for the "right" to be taken seriously (?) as equals, which they are.

From Moira Weigel, The New York Times Book Review:  "“When historians write about feminism in the early 21st century, they may well begin with We Should All Be Feminists, a TED talk Adichie gave in 2012; by the time she published a version as a short book, countless listeners knew her words by heart. This new book is another brief manifesto, and it is easy to imagine her speaking it in the same contralto. Each suggestion starts with an imperative. Some are concrete: ‘Teach Chizalum to read.’ Others are more abstract: ‘Teach her that the idea of “gender roles” is absolute nonsense.’ Embedding us in the intimacy of a friendship, the prose makes reflections that might seem common sense in the abstract feel like discoveries. The form of the letter also enacts what Adichie says is her one fixed beliefs: ‘Feminism is always contextual.’”

The Art of Thinking Clearly by Rolf Dobelli
The book, it is suggested, borrows heavily from (plagiarizes) Nassim Taleb's Fooled By Randomness.  I can't make that claim.  This book covers a list of all (?) of the reasons we have cognitive bias and why we fail to correctly account for many things.  The problem with this is that even in accounting for our cognitive bias, we can't account for where we may have bias that shapes (errantly) our cognitive bias.
The book reads more as a list/tableau of all the things we could do wrong than it does to point out how to avoid any of these issues - and in this sense, it simply highlights our need to be humble in every decision we make.  We may, in many, many, many cases, simply be wrong.

The Power of Meaning: Finding Fulfillment in a World Obsessed with Happiness by Esfahani Smith, Emily
From this Amazon.com review:
“In the introduction, the author shares her experiences with Sufism, her "parents ran a Sufi meeting house," then proceeds with the chapter that was the most fascinating to me as the parent of an introverted, deep thinking senior in high school, The Meaning Crisis, chock full of philosophical ideas and a discussion of suicide. One of the most disturbing facts in the book (and one I used in an article entitled Let's Unstigmatize Thoughts of Suicide) that comes from the CDC (p 22), "Each year, forty thousand Americans take their lives, and worldwide, that number is closer to a million." I'd imagined that the higher rate of suicide in developed than undeveloped countries had something to do with Maslow's Hierarchy, but Ms. Smith suggests the possibility that (p 23), "it is particularly distressing to be unhappy in a country where so many others are happy."

She follows this with four chapters corresponding to the pillars that support her message:
Belonging (p 49), "We all need to feel that we belong..."
Purpose (p 90), "a purpose-driven person is ultimately concerned...with making the world a better place."
Storytelling (p 104), "our storytelling impulse emerges from a deep-seated need all humans share: the need to make sense of the world."
Transcendence (p 133), "first, our sense of self washes away along with all, its petty concerns and desires. We then feel deeply connected to other people and everything else that exists in the world."

At that point in the book, I expect the conclusion or epilogue, but it's not to be. She includes a chapter entitled Growth, in which she puts forth (p 162), "The idea that we can grow to lead deeper and more meaningful lives through adversity."  . . . . it is definitely worth the read to remind us all that our society's materialistic, social media-heavy, happiness-seeking culture is the wrong path to happiness. On similar subjects: 10% Happier by Dan Harris, Coming Home by Dicken Bettinger and Natasha Swerdloff, and Listening is an Act of Love by Dave Isay.”

Posted by ~ Marty Alan Michelson at 1:17 PM No comments: