What Have We Done: The Moral Injury of Our Longest Wars by David Wood.  The concept of Moral Injury and the need for Soul Repair is not new - though the labels are new and our discernment of the true ruptures is only newly beginning to be discerned.  What happens to women and men who serve in war is no longer labeled just "shell-shock" as some temporary experience, new considerations are given to how war leaves behind morally injured humans that emerge from complex situations of conflict.  This data and these stories should help us re-think our patterns and practices of militarized violence.

Fields of Blood:  Religion and the History of Violence by Karen Armstrong.  Karen's a compelling author of significant magnitude, weaving vast amounts of data/history together.  A book I'll need to re-read for various aspects of learning from diverse religions that I had studied, though do not know as well as Armstrong has portrayed. I learned and have yet more to learn from this text.  Here is a better, full review from the New York Times.

Writing My Wrongs:  Life, Death, and Redemption in an American Prison by Shaka Senghor.  An easy read with good narrative on a complicated life story.  Originally James White now Shaka, he writes to tell his story and implicates his own journey and the complex prison system.  Revealing in so many ways, troubling.  Rated-R for sure.  I'm thankful for reading the story and yet still feel the fracture(s) of the life he lived, the murder he caused, and the brokenness of "the system" of incarceration.

Courage and Defiance: Spies, Saboteurs, & Survivors in WWII Denmark by Deborah Hopkinson.  Of course I engage stories related to the Shoah (the Holocaust).  This collection of stories is testimony to those who stood in the face of overwhelming domination to work for a world of solidarity.

I Am A Man: Chief Standing Bears Journey for Justice by Joe Starita.  I will re-read this book.  When I think about "what we did" to push out the indigenous persons who lived on this continent before the "white man" arrived, I will remember this story and grieve.  A powerful story that forces me to ponder the privilege of my skin and the horrors of our forefathers who mistreated the integrity of vast number of indigenous persons on the continent of North America.

The Color of Grace: How One Woman's Brokenness Brought Healing & Hope to Child Survivors of War by Bethany Haley Williams.  A powerful story of compassion enacted.  Love made real.  Reads like a journal, though it is Bethany's story.

Shrinks: The Untold Story of Psychiatry by Jeffery A Lieberman.  I wish I could have read this book as part of my Masters course in Psychopathology many years ago.  It gives a compelling review of how the Diagnostics and Statistics Manual became a reality, along with some narrative and biographical complexity to its history.  A great read.

He Wins, She Wins by Willard F. Harley.  Always trying to tool up resources for working with others.  This book was helpful with a win-win model and always insuring big commitments in life have buy-in from each spouse.  A good read for working through and sharing life with a loved one.

The Endless Practice: Becoming Who You Were Born to Be by Mark Nepo.  I'm not too into the books that suggest an inward journey of self-revelation that is somehow "the" way of coming to know ones-self.  And yet, we all need good "inner-work" to think, to pause, to reflect.  Honestly, I probably read this book too quickly to celebrate it the way others have! :(

Dataclysm:  Who We Are (When We Think No One is Looking) by Christian Rudder. Human behavior meets the internet.  What we can learn about humans based on what they post (do) online  Fascinating.

Creatures of a Day: And Other Tales of Psycotherapy by Irvin Yalom.  Ten stories, well written, of Yalom's work with persons dealing with their existence.  Yalom has never disappointed.

The Way of the Wise: Simple Truths for Living Well by Kevin Leman.  A reflection on wisdom from the book of Proverbs.  Stories and anecdotes to "warm the soul" and cause readers to reflect on life and value - and God.

Ruthless:  Scientology, My Son David Miscavige & Me by Ronald Miscavige.  Scientology fascinates me - as a movement untethered to anything - and yet it has a following.  It's fascinating to me.  I think it will last into the next century or two . . . or more.  I'm not sure we can ever know "the truth" about those inside, and I'm not sure I can trust this report, though I sense there is more truth than fiction in the account rendered here.

28 Days: Moments in Black History that Change the World.  A kids book, so not much to read, though I'm thankful for books like this that tell stories that we all should read.

1491: New Revelations of the Americas Before Columbus by Charles C. Mann.  I read this in 2016, then again in 2017.  I found it fascinating.  We know so little about so many indigenous persons from history.  And they may have been much more fascinating and ingenious than we have previously thought possible.

Why We Work by Barry Schwartz.  Not much more than the TED talk.  Do work that feeds your soul.

Water to the Angels: William Mulholland, His Monumental Aqueduct and the Rise of Los Angeles by Les Standiford.  I marvel at the feats of engineers and civic bands of workers and the politics behind taxation and money to have created the big cities in the world.  This story follows the journey of water and how channelling it - and navigating all the complexities involved with it - made Los Angeles a reality.  I learned much.  I found the story fascinating.

In the Kingdom of Ice: The Grand and Terrible Polar Voyage of the USS Jeannette.  I found the narrative of this historical journey to be enthralling.  I simply can't imagine having the "gumption" and "nerve" to do what these men did . . . and to have survived.  The planning, the danger . . . wow.

Mindfulness by Ellen J Langer.  I think I need to audio-read this book in snippets - when I'm out doing other things.  It's an old book - and the reviews on it are good.  I think I would do better to audioread it like a podcast, than to "plow through it" as I do with many books.  I want to come back to this one.

American Girls:  Social Media and the Secret Lives of Teenagers.  I'm still trying to figure out my girls - now late teenagers.  This book has helped me, and yet, I'm still perplexed by what we've experienced with our girls.  I have no doubt that the extremes of screen time, always being online, and access to dis-embodied texts and pornography are radically reshaping our teens - boys and girls - and our future will be framed in worse ways as a result of much of it.  It scares me.

Conquering Fear: Living Boldly in an Uncertain World by Harold Kushner.  I read Kushner's Why Bad Things Happen to God People a long time ago.  If I were to sit down with this book and that book, side-by-side, I'm not sure that I would have learned much more.  There was nothing in the book that seemed compelling to me.  Nothing extraordinary, though I am sure some tidbits would be meaningful to some persons, here and there.

Posted by ~ Marty Alan Michelson at 1:33 PM No comments: 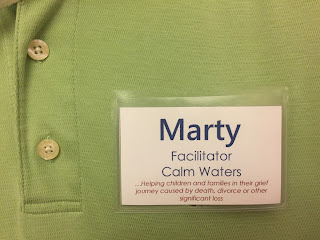 Being with people as they grieve is hard work.

Posted by ~ Marty Alan Michelson at 9:39 AM No comments: