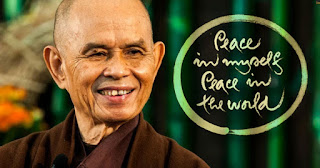 Trying to work through some of the writings/dharma talks of Thich Nhat Hanh.  His teaching as offered simply in an OnBeing podcast from many years ago was transformative in my life.

His simple notion, rooted in Buddhist thinking/teaching that misperception, miscommunication and misplaced anger are the source of our lives conflict  - rooted in our lived experiences of suffering - is central to how I see the world and how I *try* to respond to others/hurts that I experience with others.

Just yesterday a friend shared with me how he “talked back to” another coworker.  And I called him to recognize that his coworker has hurts from his life that cause him to be gruff.  Trying to see the coworker with the eyes of compassion, recognizing he lives as he does as a result of hurts he’s experienced - would help.  So, I value Brother Thay and his teaching.  One thing I do not like is I do not like the “audibooks” that are his teachings, which have been produced as books.  Minor bit - but the audio on them is poor and even while I am not a technical person for sound, the background noise/static I find to be annoying.  A few other bits.  I always gain insight from the practices/teaching on being more aware/calm/at peace - to recognize inner and inter being.  At the same time, I don’t buy into some (many?) of the metaphysical concerns of Buddhism (including various forms of re-incarnated life) (though, it is clear that there is an accuracy to their teaching that pre-understood atomic physics, understanding that “thing”-ness of life persisted beyond the lived reality of sentience.

One thing about Thich Nhat Hanh / Brother Thay - his works offer reflections on living well - being peace - being fully alive.  As such, even as some of his writings or dharma talks I “like better” than others - it is the case that any teaching he offers would give aid to any human in how to live more wholly and more fully.  Brother Thay’s teaching has been transformative in my life over the past approximately last decade.  I knew of him before that, though I only came to read/study from him since about 2009.

Old Paths White Clouds by Thich Nhat Hanh.  This book was hugely important to me - and long.  It covers the life the Buddha.  I had a kind of “wikipedia” awareness of the life of the Buddha, knowing he had been born a prince, knowing he was married and with child when he left home to pursue wisdom - finding the Way under the Bodhi Tree, etc.  This book filled in “the entire life” of the Buddha and framed it in light of his experience of coming to discerning the Way when he was with two children, one a daughter of wealthy individuals and one a poor boy who tended water buffalo.  As with many books I read, I “learned how much I did not know” when I read this book.  This book, for sure, informed me on how the teachings of the Buddha came to be, how he gained disciples, dealt with others, was received by various communities, welcomed nuns into practice, broke expectations and cultural experiences of his people and more.  An informative book in so many ways.

These have other readers as audiobooks - and - having been published/edited - follow a more predictable pattern for organized patterns of teaching/lessons:

Being Peace by Thich Nhat Hanh.  This is “one of the better” of the books by Brother Thay when it speaks to two issues - the clarity of the voice and tone of the audiobook reader - and the overall cumulative value of “all of the teachings” of the Buddha and Brother Thay.  A good book worth reviewing.

Peace is Every Step: The Path of Mindfulness in Everyday Life . . . Thich Nhat Hanh.  As above, and with much duplicate information.

Happiness:  Essential Mindfulness Practices Thich Nhat Hanh.  This book has simple practices for daily living.  Read by another author.  Good. Worth review. A good book.  To be honest, I’ve lost an ability to distinguish this book from there others in a *significant* way.  Perhaps that alone means I should re-read this book as I might have missed much in it with a bit of an overdose of Brother Thay in recent days/years -though - something I need in routine doses.

Making Space:  Creating A Home Meditation Practice by Thich Nhat Hanh.  As a short book, with practical tips, this is one of my favorite books by Brother Thay - one to re-engage, one to share with others. One to “invite” others who don’t know Brother Thay to “start here.”  This simple book is a good one.  I liked it and should use it to share with others.  It’s not like the books of his “short sayings” like How to Sit (which I like, it was a gift to me) - this book, Making Space, is good.  I liked it.  I’ll listen to it several times and will recommend it.

True Love: A Practice for Awakening the Heart.  Read by another reader - somehow it didn’t feel “as significant to me personally” as Being Peace or Peace is Every step, though, I’ll admit that once a person gets infused in “too many” books by one author, as I have recently with Brother Thay - it begins to be hard to distinguish one book from another.

The Art of Living: Peace & Freedom in the Here and Now - read by another reader.  A good practical resource to the core teaching of Brother Thay.

The Miracle of Mindfulness: An Introduction to the Practice of Meditation by Thich Nhat Hanh.  Published in the mid 1970s, as well as I know the “earliest” published work of Brother Thay. In that sense, it’s foundational to understanding Brother Thay.  I love that this book grew out of real letters he wrote to help reshape life in Vietnam.  This book is foundational to understanding Brother Thay as much as his teaching - though, again, since it was early and not written with an editor, it reads *like* letters from Brother Thay to a disciple, more than his later books (cited above) which I prefer and would recommend over this, though . . . this book is foundational and should not be overlooked.

There are a series of small, short "primers" on statements from Brother Thay - consolidated from his other talks and books, that are great for "wisdom sayings" or "daily reminders" - the "How To" series.  I have not "read" any of them through - as they are not designed to be read from cover to cover, though I enjoy each of them, particularly How to Sit.

I carry this book around with me in a specific work-site bag I use.  It's nice to have for when I'm between projects - to have some short excerpts to read.  The Pocket Thich Nhat Hanh.

Those below are Dharma Talks offered as audiobooks:

Touching the Earth  . . . Dharma Talks by Thich Nhat Hanh.  The audio is better on this than on other talks, not as much static.  There is something significant about listening to Brother Thay himself, though, this, like others, has audio noises/ticks and not as clear/focused as some books/published writings.

Truly Seeing . . . Dharma Talks by Thich Nhat Hanh..  Audio has mild static.  Basic orientation to the core of his teachings.

The Heart of Understanding:  Commentaries . . . . Dharma Talks by Thich Nhat Hanh.  The audio is imperfect, though, a “standard” set of teachings from Brother Thay.