I found out about this a few weeks back and believe I have all the details in order - so allowed SNU to announce - I get to be a Visting Faculty member at Oxford!!!!

Southern Nazarene University’s Professor Marty Alan Michelson, Ph.D has been selected to participate in a National Endowment for the Humanities Summer Institute in conjunction with Oxford University, Oxford, England. He will work specifically with the Oxford Centre for Hebrew and Jewish Studies for five weeks in July and August 2010. His status will be that of Visiting Faculty, enabling him privileged access to Oxford's Bodleian library, one of the oldest libraries in Europe. 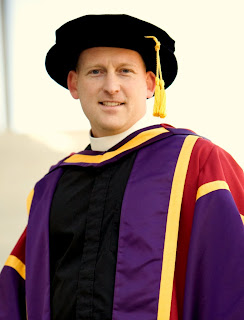 The summer institute title is: “Representations of the ‘Other’: Jews in Medieval Christendom” With other faculty members from the U.S., Michelson will explore constructions of Jewish identity in medieval Christian society. The collaborative team of distinguished scholars will examine the experience of “otherness” especially through the disciplines of history, philosophy, canon law, and art history.

Dr. Michelson learned about the possibility for this study opportunity based on information provided to him by the NEH through the School of Theology and Ministry Chair, Hal Cauthron, Ph.D. Michelson had an interest to study in the program for a variety of reasons. He has studied with and worked with Jewish scholars for several years, primarily through his coursework toward his Doctorate in Philosophy.

“My awareness of Jewish discrimination was first discerned in stories and history from the Bible. I later studied the 19th and 20th century issues of ‘otherness’ for Jews connected to the Shoah. I applied to this program to expand my awareness of Jewish issues and to learn about historical events leading to the expulsion of Jews. I hope to better discern how religious communities identify and exclude ‘the other’ not just from an historical perspective, but for modern practices of peacemaking that Jesus calls us to embody,” said Michelson.

The study will focus upon the increasingly frequent demonization of Jews in twelfth and thirteenth-century with particular attention to the experience of Jewish communities in medieval England.

“I trust the historical study will be informative. Additionally, I hope there will be creative ways to apply the history lessons to modern practices that are transformative – enabling people to embrace others instead of excluding them - in our world today,” stated Michelson. “I have not been in England since my graduation ceremonies from the University of Manchester in 2007. I look forward to the opportunity for an enriching and invigorating summer experience in the mild climate of the historically and culturally rich city of Oxford.”
Posted by ~ Marty Alan Michelson at 6:50 PM