I only recently learned of the extended and important writings of Herman Wouk - based on his newest book (just published, and he's 97!) - The Lawgiver.  He made it into my "radar" since The Lawgiver is about Moses!  Sadly, The Lawgiver "did nothing" for me and I barely read the first 20%.  (And I would agree with the 1 star reviews on Amazon - sadly!)


On the other hand, I loved reading his novel, City Boy!

The book is described as a Bronx version of Tom Sawyer - and that is an apt description.  A delightful, charming, fun read where I laughed out loud at many scenes - and found myself "pulling for" the primary character.

I copy here a review found on amazon.com - since it aptly lays out the simple plot so there is no need for me to restate it!  I enjoyed the story in every way! 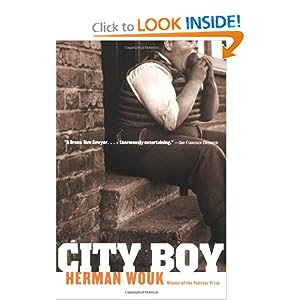 Herbie Bookbinder is a Jewish New York City kid with a little too much brains, a bit short on athleticism, and an indelible crush on Lucille Glass. His adventures, at school, and at camp, are a fun window on urban life in the twenties, and a slightly biting on the summer camps of that era. But things really heat up when Herbie and pal Cliff need to return secretly to the city . . .

While kids would naturally interest themselves in Herbie, there is an adult story, of Herbie's parents and their business troubles, going on just beyond Herbie's nose. This doesn't really hit Herbie, and the juvenile reader, until near the end of the story, but the adult reader can watch the subplot building until the resolution of all at the end of the story.