Tom Oden, a mentor to my life, deceased

I received word on December 8th that a mentor in my life had ceased to live in this world,  Rev. Dr. Tomas C. Oden.

I've had the privilege to work with Tom the past several years in a few projects in Oklahoma City, connected to the Museum of the Bible.

When he would meet new people, he looked into their eyes, asked about their lives, paid attention to their stories and remembered them the next time he saw them.  These new people - on top of the thousands of people he knew over decades and in various regions of the world - became people he cared for.

I witnessed his endearing, gracious, pastoral care for others.

It was remarkable to me the way he looked at people and cared for them.  25 earlier in my life (1990-1991), I had read one of Dr. Oden's contributions to the pastoral and academic world, his book, Pastoral Theology: Essentials of Ministry.  It was in 2012, 2013, and through this year that I witnessed his deep care for persons lived out in his life not just on the pages of his books!

I had wanted my students to drive a few miles to Tom's home to meet him this semester.  I arranged tentative plans for the meeting with Tom's personal assistant. That meeting never came to pass as I got too busy with too many other semester projects.  Now I'm deeply sad for myself and for all future students of Pastoral and Christian Theology.

Several years ago our son was featured in the local newspaper.  This past year, Tom hired our son to work on a technology project for him.  (As an octogenarian, Tom was working on an App for the iPhone!)  When I shared with Tom that our son could help him on the project, Tom said, "Oh! Is this your son that I read about in the paper a few years ago!?!?"  Where I had forgotten the event, Tom remembered the news, and our son! He cared so much for people!

He was a consummate scholar, pastor, theologian and a friend.

I've just read his A Change of Heart: A Personal and Theological Memoir.  Finishing it now, after his passing, makes me wish yet more that I wish I had made time to be with him.  He signed his copy to me, "with gratitude and admiration."  Even though I had nothing to offer him, I do believe he was grateful for our friendship and I do believe he admired me.  I deeply admired him, and in truth admire him yet more now in his passing.  His work inspires me to be more like him in how I live my life, even if I'll never match his oeuvre. 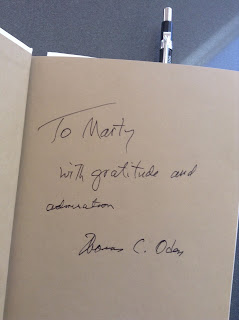 I've taken the time, too, to re-read his Pastoral Theology in these past days.  And, I anticipate I'll make an effort in early 2017 to read several other books he published that, due to my focus in Biblical Studies, I never took time to read.

For those who might read him in the future, I want to add my note of testimony to his life's legacy. He was a man who embodied the theology he published.

My life is changed for the better for having known Tom.
Posted by ~ Marty Alan Michelson at 11:14 AM