I share so that people will be mindful of what "Childermas" is, and considerate to think and pray for vulnerable children alongside American celebrations of Christmas prosperity!  (Excerpt edited to reflect 2014 dates - from www.childermas.org ) 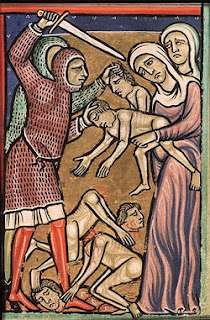 Brought to you by the Desmond Tutu Centre for Leadership

rg>
Childermas is a feast on the church calendar, that remembers the slaughter of the innocents by King Herod. It it celebrated on December 28th every year, and also weekly - on the day of the week that Dec 28th falls on, in any given year. In 2014, that is Saturday.

Recently a painting by one of the Dutch masters called Massacre of the Innocents was sold for a record-breaking price at an art auction. It is puzzling why "a violent painting, depicting Roman soldiers knee-deep in butchered babies, carrying out King Herod's edict" would fetch $116 million at a London auction, a record high for an Old Master and one of the top ten largest prices ever paid at an auction? Especially in a world where innocents are dying in their millions of AIDS! Of the 26 million people who have already died of AIDS (more than all the wars of the 20th century combined), 5 million were children. If we put our treasure where our heart is, then something has gone desperately wrong, somewhere...

When God pitched his tents and dwelt among us, he became a baby - fragile and vulnerable. Escaping Herod's despotic regime, he grew up as a refugee - in Africa. "A man of sorrows, and acquainted with grief."

Here is a bold and unprecedented suggestion... especially for those who are protestants and have a tendency to steer away from the "bells and smells" of high church tradition. Just out of solidarity, then, couldn't we set aside Thursdays in some special way, between now and December 28th? Not just to remember the dozens who were slain in Bethlehem by a despot, but to remember millions who are dying in our time because of various factors - including state indifference and recalcitrant leaders who do not role-model what it takes to stop the spread of HIV infection and thus of the AIDS pandemic.


Here are some ways to do this:
Volunteering is a mode of giving that has to be encouraged more and more, in the light of "capacity shrinkage" in Africa, and the increasing need for "capacity replenishment". But it is concentrated intensely around a trip overseas, at a particular season...


Observing Childermas could be a complementary strategy; a "long war" to borrow an all-too-familiar phrase. Are you ready to take action that is on-going and proactive? In favour of innocents who are either orphaned when their parents are taken by a pandemic through no fault of their own, or worse yet, born with AIDS? When top political and cultural figures promote behaviours that fail to dampen the spread of infection, and behind it the death phase of the pandemic, and the deluge of orphans.There are more and more people who want to do something more substantial than just making a donation, but they don't know how. Here is one suggestion - choose a way to observe Childermas, and stick with it.

Wouldn't it be great if this became a mass movement!